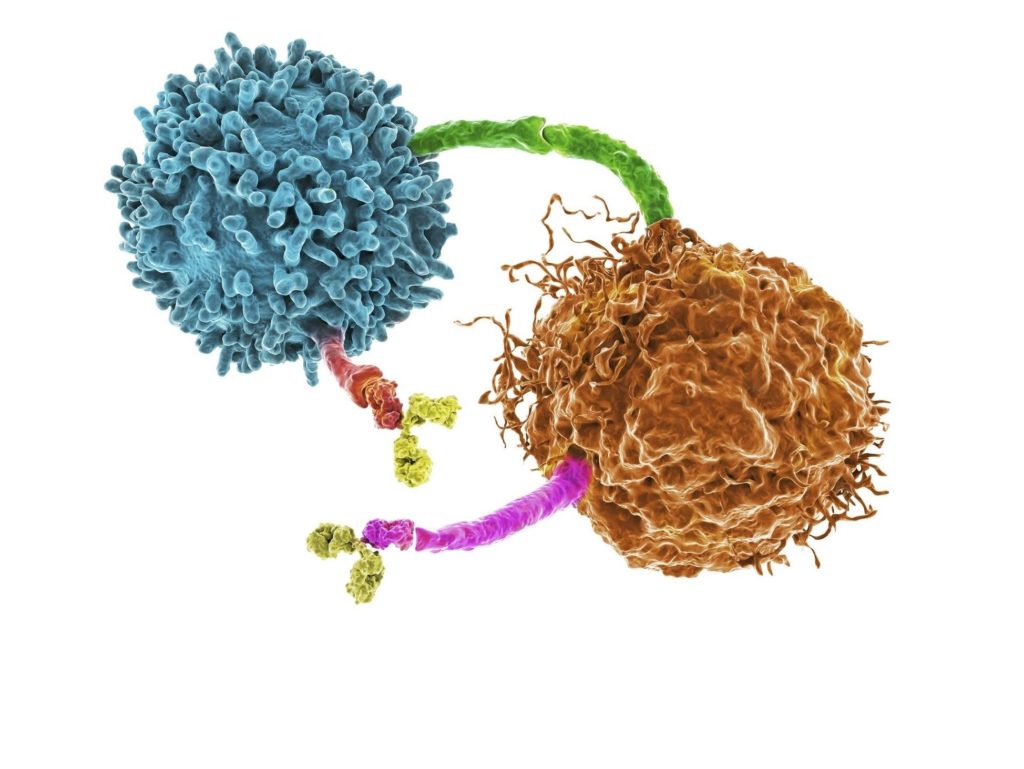 For patients with advanced Merkel Cell Carcinoma (MCC) recurrence rates are high resulting in a  five-year overall survival rates of less than 30%. To improve on this, it could be of interest to move systemic therapies (e.g. chemotherapy or immunotherapy) from the salvage setting to an earlier disease stage. Unfortunately, with chemotherapy it is highly unlikely that a long-term disease control on micro-metastases is obtained. In contrast, initial trial results with immune checkpoint inhibitors indicate that moving these drugs to early disease stages might lead to shorter treatment periods with better outcomes, especially in the neoadjuvant setting.

Current European and US guidelines for the treatment of loco-regional Merkel Cell Carcinoma (MCC) recommend resection of the primary tumour and complete lymph node dissection. In addition, it has been shown that radiotherapy can improve local control of the primary tumour. Nevertheless, five-year overall survival (OS) rates for these patients are still below 30%. These low survival rates can be attributed to the high rate if disease recurrence as patients often have micro-metastases at baseline. To address this, it could be of interesy to move systemic treatment options from the salvage setting to an earlier disease stage.

MCC is considered to be a chemotherapy-sensitive cancer with objective response rates (ORR) of 31-55%. However, cytotoxicity is high and resistance rapidly occurs. As such, long-term control of micro-metastases is unlikely with this strategy and therefore adjuvant chemotherapy is not recommended for these patients. In contrast, moving immune checkpoint inhibitors (ICIs) from the second-line treatment for metastatic patients to the first-line setting, improves the ORR from 33% to 50%. This can be explained by the improved performance status in less immunosuppressed patients and a lower disease burden. Main advantages from adjuvant ICI in locoregionally advanced MCC are the fact that both residual tumour cells and distant micro-metastases can be targeted, which leads to decreased recurrence rates and improved long-term survival. In addition, treatment is only administered for a pre-determined period of time, mostly one year. On the other hand, compared to observation alone, adjuvant ICI is associated with increased toxicity, higher costs and the potential for the emergence of resistant tumour cells. In addition, there is no indicator of efficacy during follow-up until the patient reaches first recurrence.

Currently, five studies are ongoing assessing adjuvant ICI in MCC (the ADMEC-O, STAMP, NCT03798639, ADAM and I-MAT trials). Thus far, only the results of the ADMEC trial, evaluating  adjuvant ipilimumab are available. In this trial, 36 MCC patients (mostly stage III diseas; N= 19), were randomised to ipilimumab (N= 19) or observation alone (N =17). After a median follow-up of 22.3 months, no improvement in disease-free survival was reported for patients in the ipilimumab arm (HR: 1.8, p= 0.48). In addition, more grade 3-4 toxicity was reported in the treatment arm. Given this negative benefit-risk ratio, the trial was stopped.

Data on the use of neoadjuvant therapy in  MCC are limited to only a few cases. While these reports indicate that chemotherapy could effectively reduce the tumour burden, no data were reported on recurrence rates. In addition, given the chance on chemoresistance, it is highly unlikely that a long-term disease control on micro-metastases is obtained. As an alternative, neoadjuvant ICIs are also able to reduce tumour burden before surgery and destruct the micro-metastases already present at baseline. With the primary tumour still present, neoadjuvant ICI could theoretically activate the T-cell response against tumour-associated antigens and reduce locoregional and distant recurrences. Neoadjuvant ICI only needs to be given for a short period of time with a complete response that could act as a surrogate marker for recurrence-free survival. Unfortunately, ICIs are not applicable in cold tumours and a rapid response to ICI is required to reduce the risk of progression. Furthermore, there is a risk of toxicity and delayed or cancelled surgery.

In comparison, adjuvant ICIs do not delay surgery and do not require a rapid response. Main drawbacks of adjuvant ICI are however the fact that it is given after surgery-induced immunosuppression and there is a reduced dynamics between ICI, immune cells and tumoural cells since the primary tumour has already been removed. In addition, duration of treatment is longer (6-24 months) and, as previously mentioned, there is no marker of efficacy during follow-up.

In order to assess whether neoadjuvant ICI is applicable in MCC, 39 patients in the CheckMate 358 trial received two infusions of nivolumab 240 mg before surgery. Treatment was well tolerated and most patients (87.9%) experienced a reduction in disease burden. In total, 54.5% of patients had a reduction of at least 30%. In addition, a complete pathologic response was obtained in nearly half of the patients. These patients did not experience any recurrence during follow-up. Of note, there was no predictive marker of response to neoadjuvant ICI in this trial.

MCC is amenable to ICI in advanced and early disease stages. Moving ICI to earlier disease stages might lead to shorter treatment periods with better outcomes. However, platform studies with systematic samplings are required to determine optimal regimens and drug candidates. These findings then need to be further validated in larger randomised studies.