NEW INSIGHTS IN THE TREATMENT OF ADVANCED TRIPLE-NEGATIVE BREAST CANCER 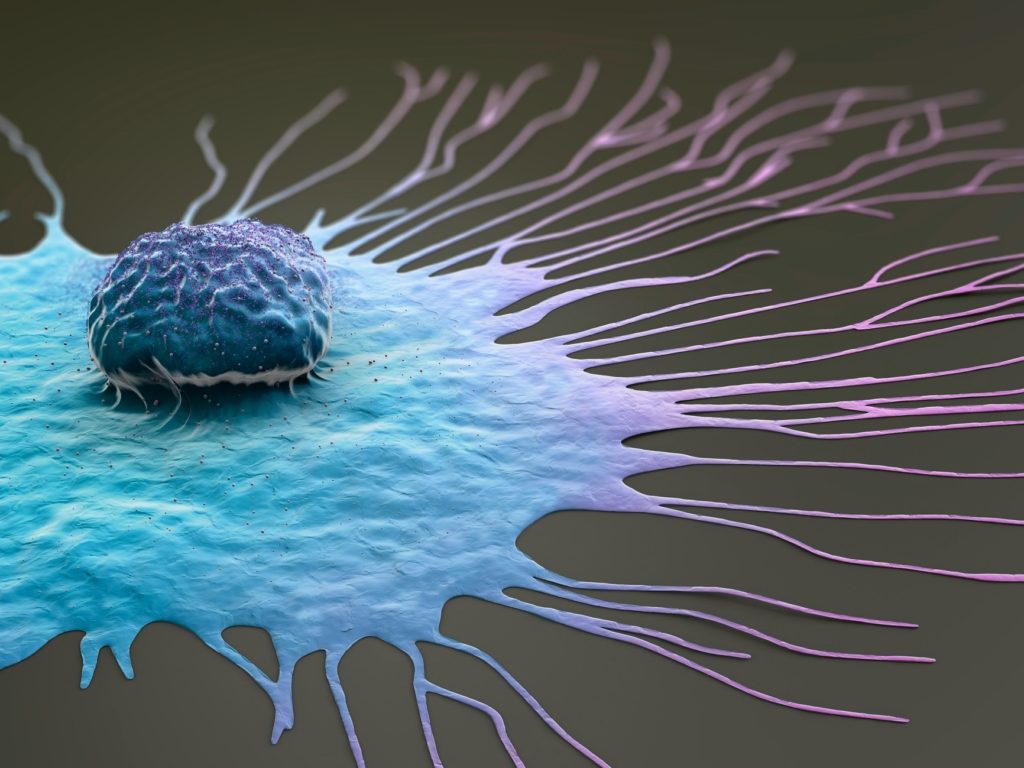 Triple-negative breast cancer (TNBC) has a notoriously dismal prognosis in comparison to other BC types. Updates to the treatment paradigm for TNBC were presented at the 2021 23rd BSMO annual meeting. Immune checkpoint inhibition has been investigated in a first-line advanced TNBC setting.

Positive results in this setting have also been reported in the phase III IMpassion 130 trial. Investigating atezolizumab vs. placebo, in combination with nab-paclitaxel in the first-line setting. The study randomised 902 advanced TNBC patients with a disease-free interval of 1 year or more. In the IC-positive subgroup, a median OS of 25.4 months was reported with the atezolizumab-based regimen as compared to 17.9 months with the placebo, (HR[95%-CI]: 0.67[0.53–0.86]). The PFS in the intention-to-treat population also increased in this trial.56 Surprisingly, the companion phase III IMpassion 131 trial yielded contradictory results. Evaluating atezolizumab in the same patient setting as IMpassion 130, patients received paclitaxel (instead of nab-paclitaxel), finding that the placebo group outperformed the combination-arm in the Immune cell (IC)-positive population (mOS: 28.3 vs. 22.1 months. HR[95%-CI]: 1.12[0.76–1.65]).57 These contradictory findings may be the result of an apparent over-performance of the singletaxane control-arm (typically this regimen gives a median OS of 17.2 months in other advanced TNBC trials).

Beyond first line, pembrolizumab was shown to have similar activity as single-agent chemotherapy in second or third line treatment for advanced TNBC patients with a CPS ≥1 and ≥10, in the phase III Keynote-119 trial. This study assessed pembrolizumab in comparison to capecitabine, eribulin, gemcitabine or vinorelbine in 622 advanced TNBC patients who had progressed to second or third line treatment. Finally, pembrolizumab performed better than single-agent chemotherapy in patients with a CPS ≥ 20 in this trial (median OS: 14.9 vs. 12.5 months. HR[95%CI]: 0.58[0.38–0.88]).58

Clearly, PD-L1 expression status is a predictive biomarker in an advanced TNBC setting. IC and CPS scores both quantify PD-L1 expression, although there are differences between the two scores. While the IC score is based on the percentage of tumour area covered by PD-L1 positive immune cells, the CPS is defined as the total number of PD-L1 cells, including tumour cells, lymphocytes and macrophages, divided by the total number of tumour cells, multiplied by 100.59 As a result, the IC scoring system is generally seen as being more specific but less sensitive than CPS. The concentration of PD-L1 positive cells also differs depending on the tissue sample type. PD-L1 positive cells are more frequent in primary tumours than in metastatic samples and are more prevalent in lymph nodes compared to liver tissue. Microsatellite instability-high/ mismatch repair deficient (MSI-H/MMR) and high tumour mutational burden (TMB) have been identified as potential biomarkers for immunotherapy efficacy in advanced TNBC. A high TMB (≥10 mut/Mb) is seen in approximately 10% of advanced TNBC patients and was associated with a response rate of 21% in the phase II TAPUR trial. However, the clinical utility of high TMB as a predictive biomarker is somewhat uncertain; as there is an overlap with PD-L1 expression.60

High microsatellite instability is a rare finding in TNBC, featuring in approximately 1–2% of advanced TNBC patients.61 Importantly, a low TMB and a low level of microsatellite instability should not be interpreted as negative predictive biomarkers for ICI. In fact, the Keynote-119 trial showed that the majority of IC responders actually had a TMB of 10 or less.58 PARP inhibitors have also showed some promise in TNBC patients. Olaparib and talazoparib are EMA-approved as monotherapies for the treatment of locally advanced or metastatic HER2- negative BC with germline pathogenic variants in BRCA1 or BRCA2 (reimbursement pending in Belgium). Furthermore, the addition of veliparib to carboplatin in this patient setting also shows a modest PFS benefit in the Brocade-3 trial.62 As a result, all advanced HER2-negative BC patients should be offered evaluation of germline BRCA mutations, irrespective of their family history or age of onset. Several phase II studies also demonstrate the efficacy of oliparib and talazoparib in advanced HER2-negative BC with germline or somatic alterations to homologous recombinant genes other than BRCA, with an ORR up to 82% in patients with alterations in PALB2, and up to 50% in somatic BRCA1/2 mutations. Conversely, only limited activity is observed with these drugs in patients harbouring CHEK2 or ATM alterations. 63 Several clinical trials are ongoing, investigating PARP single agent and combination activity in this patient setting. Accommodating for the FDA approval of pembrolizumab in a TNBC setting, and dependent on the anticipated OS data, the BSMO treatment algorithm for TNBC is poised to include the option of pembrolizumab in combination with chemotherapy if the patient is PD-L1-positive with a CPS ≥10.64

For metastatic TNBC, the antibody-drug conjugate (ADCs) sacituzumab govitecan (SG) has yielded promising results. The phase III ASCENT trial evaluated SG in comparison to the a physicians’ choice of chemotherapy in 529 metastatic TNBC patients who had been exposed to ≥2 prior lines of chemotherapy, or 1 prior line if progression had occurred within twelve months. Significant improvement with SG was observed in terms of both PFS and OS (median PFS: 5.6 vs. 1.7 months. HR[95%CI]: 0.41[0.32–0.52], p< 0.0001. Median OS: 12.1 vs. 6.7 months. HR[95%CI]: 0.48[0.38–0.59], p< 0.0001). However, the toxicity profile of SG differed from that of other ADCs, with the most common grade ≥3 TRAEs being neutropenia (51%), diarrhoea (10%), anaemia (8%) and febrile neutropenia (6%). Total alopecia is also to be expected with this drug. In this study, SG outperformed the physicians’ choice irrespective of Trop-2 expression and germline BRCA mutations, although the benefit with SG was lower in case of a low Trop-2 H-score.65

In summary, for IC-positive, advanced TNBC patients, atezolizumab in combination with nab-paclitaxel is the current SoC. In addition, pembrolizumab plus (nab)paclitaxel was shown to improve the PFS in this setting (CPS ≥10), but for this regimen OS data is still immature. For patients with germline BRCA mutations, olaparib plus talazoparib offers improved PFS outcomes, compared to single-agent chemotherapy, and PARP inhibitors show promise as a treatment option for patients with homologous recombination deficiencies other than BRCA. Furthermore, SG appears a highly effective 3rd-line regimen that is under current investigation in unselected advanced TNBC. Finally, several subgroups with potential therapeutic relevance have been identified, and comprehensive genomic profiling should be considered to identify suitable patients for clinical trials or early access programs.