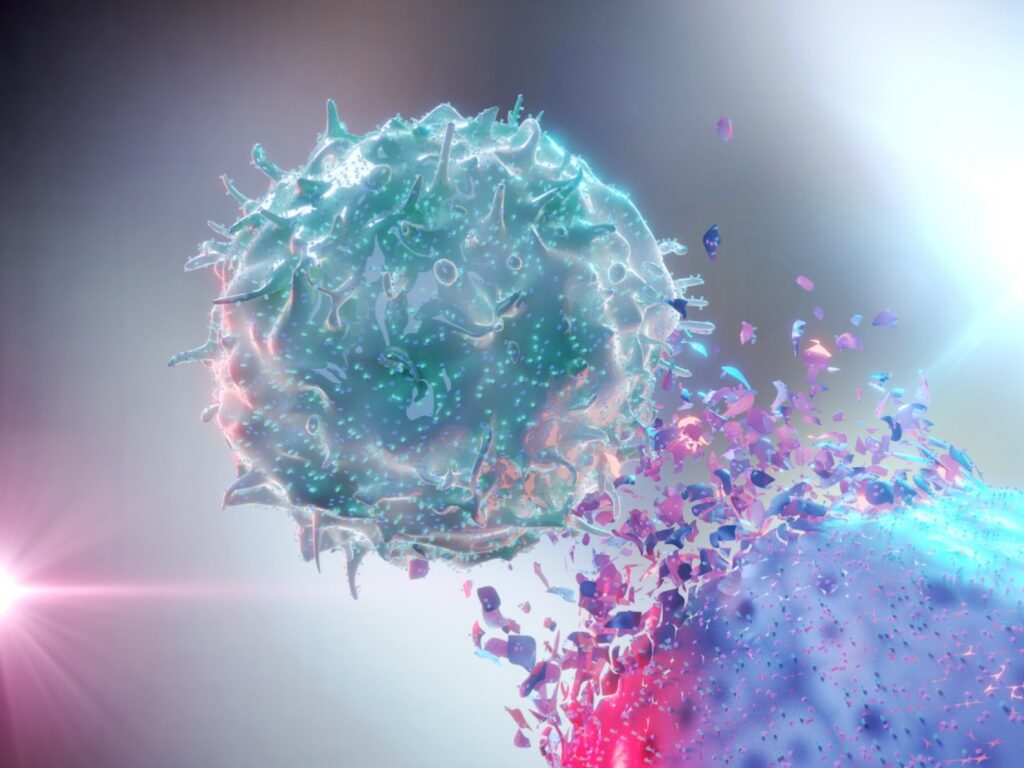 This multicentre, single-arm, proof-of-concept, phase II trial enrolled adult patients with histologically proven classic or endemic Kaposi’s sarcoma with progressive cutaneous extension. All patients required systemic treatment and had an Eastern Cooperative Oncology Group performance status of 0-1. Patients were treated with 200 mg pembrolizumab intravenously every three weeks for six months (eight cycles) or until severe toxicity. The primary endpoint was the best overall response rate within the 6-month timeframe, defined by the occurrence of a complete response or partial response and assessed by an investigator using the modified AIDS Clinical Trial Group (ACTG) criteria. Three or more responses among the seventeen patients were needed for the primary endpoint to be met, using a Simon’s two-stage optimal design assuming a 30% response rate as desirable. For this final study analysis, all patients were included following the intention-to-treat principle.

Between July 2018 and December 2019, 30 patients were screened for eligibility and seventeen were enrolled. Of those, eight (47%) and nine (53%) patients were diagnosed with classic and endemic Kaposi’s sarcoma, respectively. Twelve patients (71%) had previously received at least one systemic treatment for Kaposi’s sarcoma, including chemotherapy (65%) and interferon (18%). The median follow-up was 20.4 months. In total, 88% (15/17) of the patients completed six months (eight cycles) of pembrolizumab treatment, while two patients discontinued due to adverse events. No deaths occurred during the study period. As the best response, two (12%) patients had a complete response, ten (59%) a partial response and five (29%) had stable disease within the 6-month treatment timeframe. The best overall response rate was  thus 71%, meeting the predefined primary outcome (i.e., exceeding a response rate of 30%). Among the responders, the median time to response was 4.8 months and, in a post-hoc analysis, the estimated median duration of response was 23.4 months. The median time to progression was 24 months. Of the patients with endemic Kaposi’s sarcoma, six (67%) had a response, including two patients with a complete response. Six (75%) of the eight patients with classic Kaposi’s sarcoma had partial response as the best response. Among the patients previously treated with chemotherapy (N= 11), seven (64%) had a partial response after treatment with pembrolizumab. Five of the six chemotherapy-naïve patients had a response after treatment with pembrolizumab, including two complete responses and four partial responses.

Treatment-related adverse events occurred in 13 (76%) patients, including two grade 3 adverse events. Of those, one (6%) patient suffered from acute cardiac decompensation and one (6%) patient was diagnosed with a granulomatous reaction. Treatment was prematurely discontinued in two (12%) patients due to grade 3 acute reversible cardiac decompensation and grade 2 pancreatitis and one other patient had a grade 3 granulomatous reaction in mediastinal lymph nodes requiring steroids and methotrexate treatment. There were no grade 4 or 5 adverse events or treatment-related deaths.

This is the first study that assessed the anti-tumour activity of PD-1 inhibitors in patients with classic and endemic Kaposi’s sarcoma. In this prospective trial, pembrolizumab showed promising anti-tumour activity and an acceptable safety profile. If these results are confirmed in larger studies, treatment with anti-PD-1 could become part of the therapeutic armamentarium for patients with classic or endemic Kaposi’s sarcoma.