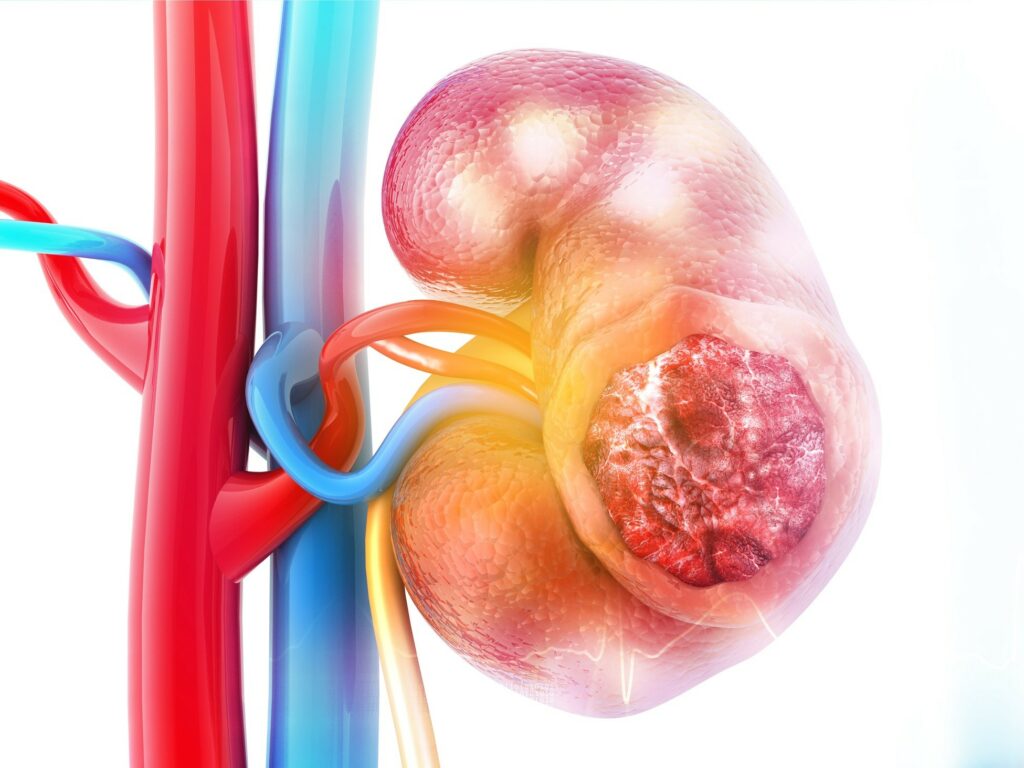 Previously, four groups of clear-cell renal cell carcinoma (ccRCC) patients were identified according to different tumour microenvironments and sensitivities to sunitinib. BIONIKK is the first randomised trial demonstrating the feasibility of patient selection based on tumour molecular phenotypes to choose the most efficacious treatment between nivolumab, nivolumab-ipilimumab or VEGFR-TKI in the first-line treatment of metastatic ccRCC patients.

Immune-checkpoint inhibitors have reshaped the frontline management of patients with metastatic clear-cell renal cell carcinoma (ccRCC). The use of combinations of these agents, such as nivolumab-ipilimumab (NIVO + IPI), has enriched the first-line treatment landscape of metastatic ccRCC. Despite these achievements, most patients have tumour progression within the first two years of treatment in the absence of a predictive biomarker of efficacy available for their selection. Previously, four biologically distinct clear-cell renal cell carcinoma tumour groups (ccrcc1 to ccrcc4) have been described. Tumours that are less responsive to sunitinib have either a pro-inflammatory and immune-high tumour microenvironment with a high expression of immunosuppressive checkpoints (ccrcc4) or, by contrast, an immune-low tumour microenvironment (ccrcc1). Nearly half of the most responsive tumours to sunitinib expressed an angiogenic-high and immune-high signature (ccrcc2). The smallest group with a good response to sunitinib had molecular and pathological features closest to normal kidney tissue (ccrcc3). Since the efficacy profile might differ with NIVO and NIVO + IPI among these groups, this study evaluated the efficacy of these treatments and of VEGFR-tyrosine kinase inhibitors (VEGFR-TKIs) in patients according to the different tumour molecular groups.

BIONIKK was a biomarker-driven, open-label, non-comparative, randomised, phase II trial including adult patients (≥18 years) with newly diagnosed or recurrent stage IV renal cell carcinoma. Further, patients had to have an ECOG performance status of 0-2, one or more measurable lesions per RECIST version 1.1, and had not received previous systemic therapy for metastatic disease. Patients were randomly assigned (1:1) using permuted blocks of varying sizes to receive either NIVO or NIVO + IPI (ccrcc1 and ccrcc4 groups), or either a VEGFR-TKI or NIVO + IPI (ccrcc2 and ccrcc3 groups). Patients assigned to NIVO + IPI received intravenous NIVO 3 mg/kg plus IPI 1 mg/kg every three weeks for four doses, followed by intravenous NIVO 240 mg every two weeks. Patients assigned to NIVO received intravenous NIVO 240 mg every two weeks. Patients assigned to VEGFR-TKIs received oral sunitinib (50 mg/day for four weeks every six weeks) or oral pazopanib (800 mg daily continuously). The primary endpoint was the objective response rate. The primary endpoint and safety were assessed in the population who received at least one dose of study drug.

Treatment-related adverse events (TRAEs) were observed in 93%, 99% and 95% of patients receiving NIVO, NIVO + IPI or VEGFR-TKI, respectively. The most common grade 3-4 TRAEs were hepatic failure and lipase increase (3% for both) with NIVO, lipase increase and hepatobiliary disorders (6% for both) with NIVO + IPI, and hypertension (15%) with a VEGFR-TKI. Serious TRAEs occurred in 3%, 38% and 25% of patients receiving NIVO, NIVO + IPI and VEGFR-TKI, respectively.  There were three treatment-related deaths, one due to fulminant hepatitis with NIVO + IPI, one from heart failure with sunitinib, and one due to thrombotic microangiopathy with sunitinib.

BIONIKK is the first reported randomised trial in the first-line treatment of patients with metastatic ccRCC with treatment allocation based on prospective molecular classification. Overall, the results suggest that patients with ccrcc4 tumours might be the best candidates to receive NIVO + IPI, while VEGFR-TKI alone or in combination would be the best option in patients with ccrcc2 tumours. The feasibility of prospectively selecting patients by their molecular group for treatment choice opens the way to larger biomarker-based trial designs.