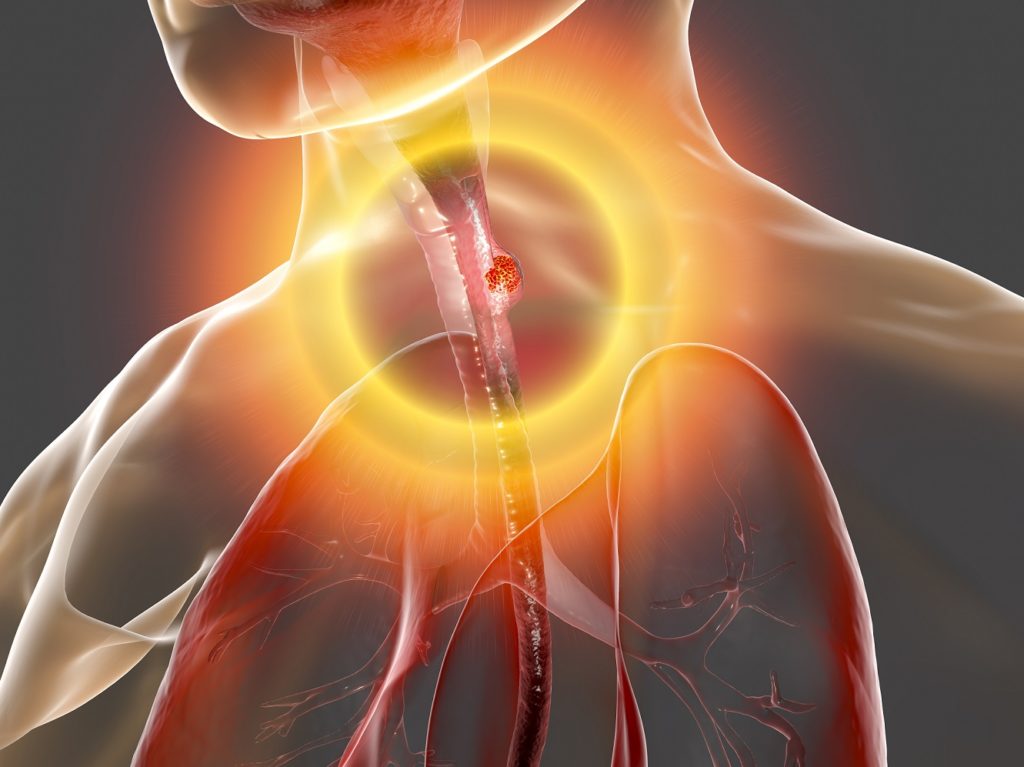 Morbidity and mortality of patients who underwent MIE after nCRT vs. nCT for locally advanced ESCC

In this multicentre, open-label, randomised clinical trial, 264 patients with ESCC of clinical stages from cT3 to T4aN0 to 1M0 and no clinical evidence of metastatic spread were randomised (1:1) to the nCRT or nCT group. Chemotherapy, based on paclitaxel and cisplatin, was administered to both groups, while 40 Gy of concurrent radiotherapy (20 x 2 Gy) was added for the nCRT group. Six weeks after neoadjuvant therapy, minimally invasive oesophagectomy via thoracoscopy and laparoscopy was performed for the patients in both groups.

Initial results demonstrated that the patients who underwent nCRT followed by MIE had no significantly added postoperative morbidities (47.4% for nCRT vs. 42.6% for nCT, p= 0.48) or increased mortality. Ninety-day mortality rates were 3.5% in the nCRT group (4 of 114) and 2.8% in the nCT group (3 of 108) (p= 0.94). Causes of death were pulmonary function failure, severe systemic inflammation, massive haemorrhage of gastrointestinal tract, oesophageal tracheal fistula and superior mesenteric artery embolism. The R0 resection rates were similar between the nCRT and nCT group (p= 0.92), nevertheless patients in the nCRT group had a better tumour regression grade (p< 0.001), less lymph nodes involved (p= 0.03) and a better ypTNM stage than the nCT group (p< 0.001). The one-year overall survival rate using intention-to-treat analysis was 87.1% in the nCRT group and 82.6% in the nCT group (p= 0.30). Furthermore, deaths caused by tumour progression or recurrence were significantly less in the nCRT group than in the nCT group (6.8% vs. 14.4%, p= 0.046). However, deaths from non-tumour causes were similar (6.1% vs. 3.0%, p= 0.24).

Neoadjuvant chemoradiotherapy based on paclitaxel and cisplatin followed by minimally invasive oesophagectomy results in a better histopathologic outcome, as well as similar morbidity and mortality rates, compared with neoadjuvant chemotherapy. Nevertheless, further follow-up is necessary to assess the long-term survival benefit of nCRT versus nCT.