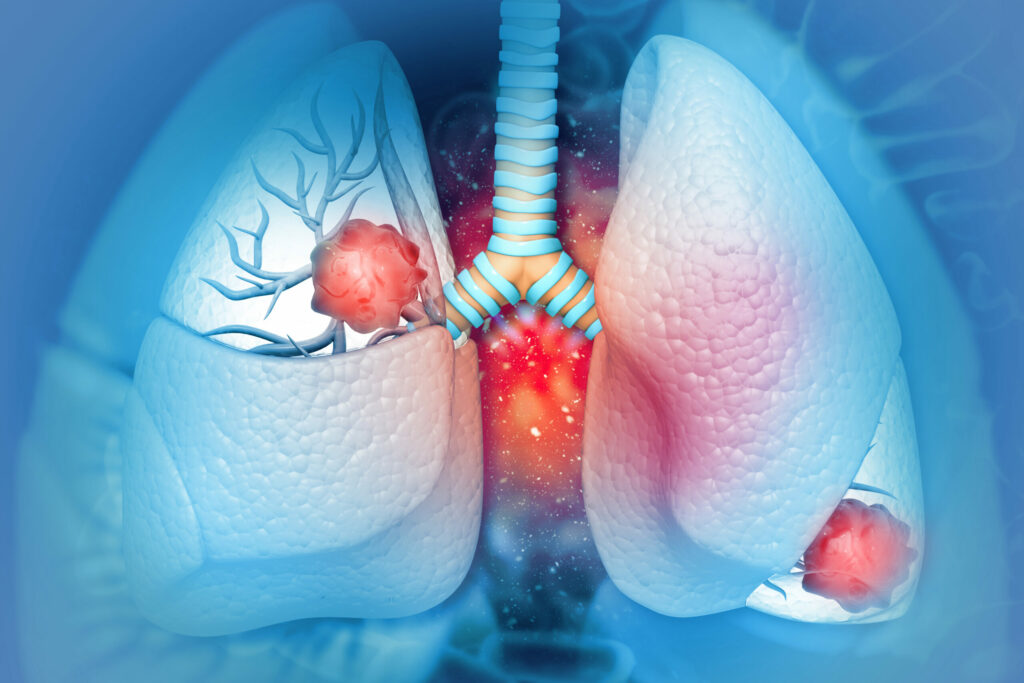 To date, there is an unmet medical need for patients with non-small cell lung cancer and MET exon 14 skipping mutations (METex14+ NSCLC). Savolitinib is a highly selective oral MET tyrosine kinase inhibitor that previously demonstrated promising anti-tumour activity with an acceptable tolerability in this patient population. Updated results of the phase II NCT02897479 trial further confirm the benefit of savolitinib in patients with METex14+ NSCLC across all predefined subgroups.

The open-label phase II study at hand enrolled patients with locally advanced or metastatic METex14-positive PSC or other NSCLC subtypes, who had either presented with disease progression or toxicity intolerance towards one or more standard treatments or were deemed clinically unsuitable for standard treatment, were MET inhibitor-naive, and had measurable disease. Eligible patients received oral savolitinib at 600 mg (body weight ≥50 kg) or 400 mg (body weight < 50 kg) once daily in 21-day cycles. Tumour was evaluated every six weeks during the first year, every twelve weeks thereafter. Treatment was continued until disease progression or unacceptable toxicity. The primary endpoint of the study was independent review committee assessed objective response rate (ORR).

Of the 70 patients who were enrolled in the study and assigned to treatment (full analysis set, FAS), 25 were diagnosed as PSC and 45 as other NSCLCs, 28 were treatment-naïve and 42 were pre-treated, 15 patients had brain metastases. Among treated patients, median age was 68.7 years, 59% were male and most of them were non-smokers (60%). Of note, in the FAS, 23% of patients were 75 years or older and most patients had an ECOG performance status of 1 (81%). In the treatment-naïve population, median age was higher as compared to other subgroups, with a median age of 74.5 years and 43% of patients being older than 75 years. In this subgroup, almost half of the patients had PSC (46%). The data cut-off for the presented final analysis was June 28, 2021. At that time point, 8 patients were still on-treatment and 14 (20%) patients had received more than 18 months of treatment. With a median follow-up of 28.4 months, the median PFS reached 6.9 months with a 12- and 15-month PFS rate of 31% and 25%, respectively. No difference in median PFS was observed between previously treated and treatment naïve patients (6.9 months for both). Among patients with PSC and other NSCLC, a median PFS of 5.5 and 7.0 months respectively was reported. Finally, for patients with and without brain metastases, the median PFS reached 7.0 and 6.2 months.

The median OS reached 12.5 months for all patients assigned to treatment, with an 18-month OS rate of 42%, dropping to 31% at 24 months. In pre-treated and treatment-naïve subgroups respectively, the median OS was 19.4 months and 10.9 months. However, this large difference in OS should be interpreted with caution since the treatment-naïve population contains a higher proportion of patients with PSC (46% vs. 29% in pre-treated patients) and has a higher median age. Patients with PSC had a short median OS as compared to those patients with other NSCLC (mOS of 10.6 months vs. 17.3 months), likely due to the poor prognosis associated with this disease entitiy. Patients with brain metastases had a median OS of 17.7 months with an 18-month OS rate of 50.0% and a 24-month OS rate of 36%, which further confirms savolitinib as a promising agent for this subgroup. Grade ≥3 treatment-emergent adverse events were reported in 32 (45.7%) patients, the most frequent being aspartate aminotransferase increased (12.9%), alanine aminotransferase increased (10.0%) and peripheral oedema (8.6%). Overall, with prolonged follow-up and exposure, the incidences of adverse events were similar to previously reported data, and consistent across subgroups.

The updated results further confirm the benefit of savolitinib in patients with METex14+ NSCLC. Results were consistent in each subgroup and savolitinib demonstrated an acceptable safety profile.