Read online
Forgot Password? Not a member yet? Register here
News > Health of Tomorrow > Scientists come up with microrobot that can deliver cancer medicine on target 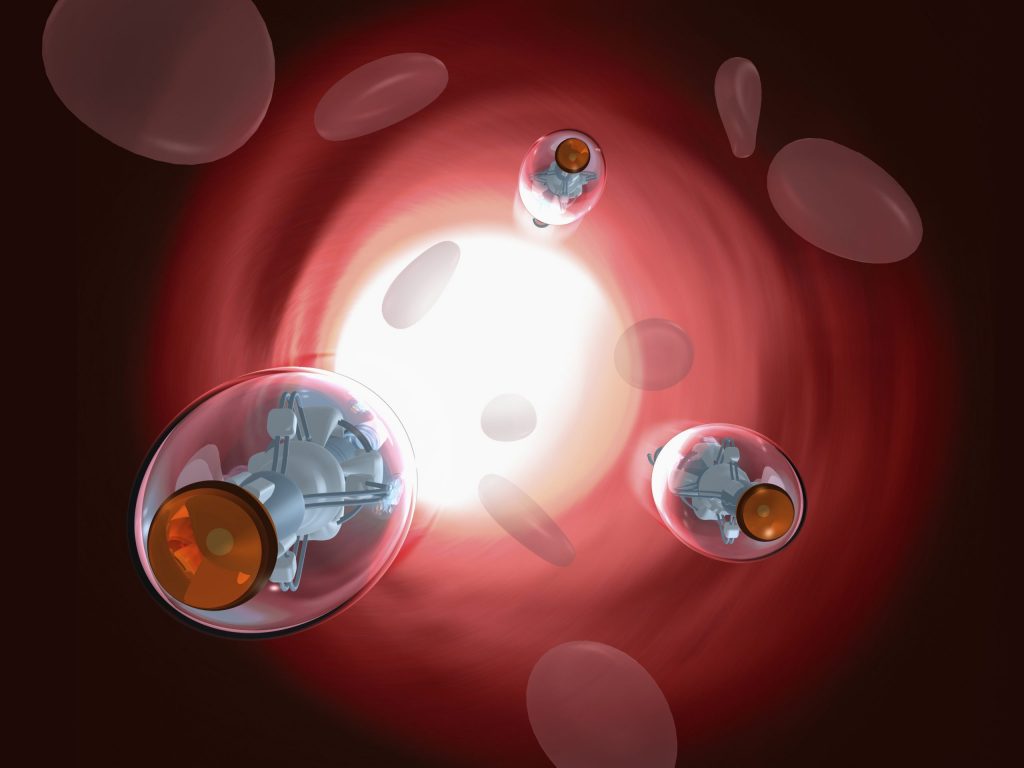 It’s almost like something out of a science fiction movie: a swarm of minuscule robots, that navigate the bloodstream in order to find and destroy cancerous tumors. But scientists from the Max-Planck Institute for Intelligent Systems (MPI-IS) in Stuttgart (Germany) have come up with precisely that. This week, Science Robotics magazine published their research.

The nanobots have been engineered and designed to look and move like white blood cells. They have been dubbed ‘microrollers’ by the scientists, because of their ability to navigate the blood stream by clinging to the arterial walls, where the current is less strong and cell density less high. The German researchers were able to move the nanobots around an artificial artery in their laboratory using powerful electromagnets.

“Our vision was to create the next-generation vehicle for minimally invasive targeted drug delivery that can reach even deeper tissues inside the body with even more difficult access routes than what was previously possible,” Metin Sitti, Director of Physical Intelligence at the Max Planck Society, says in a press release by the MPI-IS.

The robots are coated in nickel and gold film on one side, and anti-cancer medications and biomarkers on the other. These allow the nanobots to identify different kinds of cells. If they spot a cancer cell, they can quickly drop their medication payload. The nanobots are made of glass microparticles and measure 8 micrometers in diameter. Driven by magnetic fields, they can travel against the blood stream at a speed of 600 micrometers per second, which is, according to the researchers, the fastsest speed of any microbot of its size.

“Using magnetic fields, our micro-robots can navigate upstream through a simulated blood vessel, which is challenging due to the strong blood flow and dense cellular environment,” Max Planck Society researcher Yunus Alapan states. “None of the current micro-robots can withstand this stream.”

But the team says it will still be a long time before they can actually test the robots in humans. Especially because the magnet-driven technique the researchers used to steer the robots through an artificial vein in the lab wouldn’t work in a human body. “Also, resolution of the current imaging modalities in a clinic are not high enough for imaging individual microrobots inside the human body” adds co-lead Ugur Bozuyuk.

“Furthermore, therapeutic cargoes transported by a single microrobot would not be sufficient, given the size difference between a microrobot (around 10 micrometers) and the target tissues (thousands of micrometers). Therefore, the controlled manipulation of a high number of microrobots in a swarm would be necessary to generate a sufficient effect. But we are still far from that.”

Research into medical application of micro-robotics has been ongoing for the past two decades, after a famous speech by Nobel Prize laureate Richard Feynman on the matter, during which he quipped the phrase ‘swallowing the surgeon’. A rapid succession of technological breakthroughs, on manufacture, material use and imaging technology has created a strong momentum for medical nanotechnology.

Presently, microbots are already being used in medical procedures, but mostly in superficial settings (such as the inner eye) of in easily accessible locations, like the gastro-intestinal tract. Introducing microbots into the circulatory system was long seen as impossible because of the challenging conditions inside blood vessels. The newly designed ‘microroller’ seems to be able to handle those conditions, at least in a laboratory setting. If a way can be found to track and steer the nanobots within the human body, the future may well bring therapies where cancer patients receive a swarm of medicine-laden nanobots, who seek and destroy their tumours cell by cell.

The Max-Planck Institute for Intelligent Systems in Stuttgart released this press statement with the title ‘Rollers in the deep’.