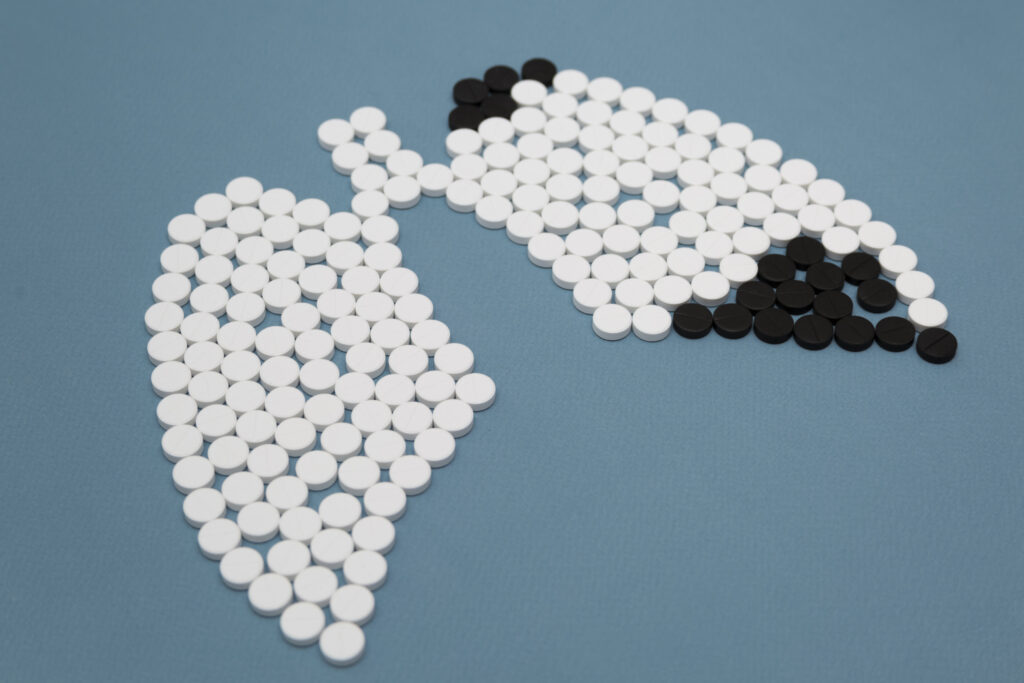 In Chinese patients with previously untreated, locally advanced or metastatic non-squamous non-small cell lung cancer (NSCLC), the addition of sintilimab to chemotherapy with pemetrexed and platinum resulted in a considerably longer progression-free survival (PFS) than with chemotherapy alone. Final overall survival (OS) results of the ORIENT-11 trial now demonstrate that this PFS benefit also translates into an improved OS with sintilimab plus chemotherapy as compared to placebo plus chemotherapy.

Compared to pembrolizumab or nivolumab, the anti-PD1 antibody sintilimab has a different binding site and potentially greater affinity against PD-1 as per the preclinical data. In ORIENT-11, first-line sintilimab plus pemetrexed significantly improved the PFS compared to placebo plus pemetrexed-platinum (PPP) in patients with advanced metastatic non-squamous NSCLC. The study met the primary endpoint of PFS at the interim analysis in November 2019. At ELCC 2022, final overall survival (OS) results from ORIENT-11 were presented.

ORIENT-11 is a randomised, double-blind, multicentre, phase III trial conducted in China. Patients with treatment-naïve locally advanced or metastatic non-squamous NSCLC without sensitising epidermal growth factor receptor (EGFR) or anaplastic lymphoma kinase (ALK) genomic tumour aberrations were randomly assigned (2:1) to sintilimab 200 mg (IV on day one of each 3-week cycle) plus pemetrexed and platinum (SPP, N= 266) or placebo plus pemetrexed and platinum (PPP, N= 131) for four cycles, followed by maintenance treatment with sintilimab or placebo plus pemetrexed. Patients were stratified by PD-L1 expression, platinum-chemotherapy and sex. Treatment of SPP or PPP continued until progressive disease (PD), unacceptable toxicity, or a maximum of 24 months. Patients in the PPP arm were allowed to cross over to receive sintilimab monotherapy upon PD. Primary endpoint was PFS (RECIST v1.1) by blinded independent radiographic review committee. Key secondary endpoint was OS, defined as the date of randomisation to the date of death due to any cause.

Baseline patient characteristics were generally balanced between the two treatment arms. At data cut-off (September 15, 2021), median study follow-up was 30.8 months. Of the 397 patients enrolled, 243 OS events were observed. Of the patients in the PPP arm, 47% crossed over to sintilimab monotherapy per protocol. The median OS was 24.2 months in the sintilimab plus chemotherapy arm and 16.8 months in the control arm (HR[95%CI]: 0.65[0.50-0.85]). Estimated 2-year OS rates were 50% and 32% for SPP and PPP, respectively. After adjusting for the crossover effect, the OS treatment effect was even more pronounced with a hazard ratio of 0.52 (95%CI: 0.38-0.69). The OS benefit across all pre-specified subgroups was largely consistent with what was observed in the intention-to-treat population. The OS trend was similar for patients with stage IIIB/C ineligible for radical surgery or chemo radiation with a curative intent (HR[95%CI]: 0.30[0.10-0.89]) and stage IV (HR[95%CI]: 0.67[0.51-0.88]) disease. Overall, the degree of variability observed across subgroups were within the range expected for the size of the subgroup and number of subgroup analyses.

In the final OS analysis from ORIENT-11, sintilimab plus pemetrexed and platinum continued to demonstrate an improved OS compared to the placebo combination as first-line therapy in advanced metastatic non-squamous NSCLC without EGFR or ALK genomic tumour aberrations. The treatment effect of sintilimab plus pemetrexed and platinum on OS was robust and consistent with other PD-L1 inhibitors in this indication.